The winner of the ‘Show Us The Data’ competition, organised by the Leiden-Delft-Erasmus Centre for BOLD Cities and construction association Bouwend Nederland, is graphic design student Gianni Ritchie. For the competition, designers and artists were invited to visualise data in the city in a creative manner. With his ‘My Data App’, Ritchie uses a video animation to demonstrate what it would look like if all the data in the city were visible. This what-if concept secured him the first prize of € 2,500. Click here for the video featuring the work of all the prize-winners.

Second-prize winner Laurens Kolks surprised by entering a physical object; a Smart City Souvenir in the form of a mug that connects the digital to the physical city. Furthermore, two honourable mentions were given their deserved moment in the spotlight: Konstanze Winter and Ruben Smits participated with a video of a WiFi network name poem, and WE ARE DATA contributed by sharing their Mirror Room - an installation that is designed to immerse its participants in the overwhelming possibilities of data collection.

The Show Us The Data award ceremony was hosted by ScienceWorks at their conference on data-driven policy in The Hague. BOLD Cities’ academic director Liesbet van Zoonen awarded the prizes on behalf of her team, and promised all winners that their valued input may well be called upon by the Centre in the near future.

An impression of the entries on our shortlist can be found in the video (in Dutch). 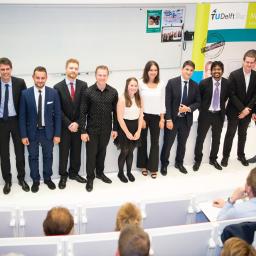 The very first certificates for the Nanobiology Master's degree programme were awarded in Rotterdam on 28 September 2017.

What is good open online education?

The story of ‘The Happy City’

Henk Dekker Award of the Centre for Education and Learning