Collaborating in the Nanoworld

The Casimir Research School is Leiden University's and Delft University of Technology’s joint research school in interdisciplinary physics, which brings together over 240 PhD students, 130 postdocs and 100 faculty members. It is a hub of young talented scientist who work with the best professors in their fields.

We talked with Artur Kaczmarczyk and Sander Blok, who are PhD-students working in the Casimir Research School. Both are attached to a joint research project in the big NanoFront programme: a consortium of nanoscientists at the Kavli Institute of Nanoscience Delft and the Leiden Institute of Physics (LION) funded by the NWO Gravitation Programme.

ARTUR KACZMARCZYK AND THE ORGANISATION OF THE GENOME

Artur Kaczmarczyk studied Biotechnology in Poland and then moved to Ulm, Germany, for an internship in Biophysics. There, he realised that his future would lie in this new research field. ‘I found out about open positions in the Casimir Research School and applied. I have just started my third year now.’

‘I investigate the organisation of the genome. DNA is a large molecule, metres long, and it is a challenge to fit it into a micrometer-sized cell in such a way that the genetic information is accessible. DNA wraps around protein spools. The resulting string is called chromatin. It is flexible, like the old-fashioned telephone cord that you mindlessly play with during a phone call. It makes the DNA compacted into a smaller volume and regulates gene expression.‘

‘This is extremely fundamental and that kind of research I enjoy most! Why, for instance, are the skin cell and the liver cell so different even though they contain the same DNA? And how do the stem cells differ from mature cells? We now know that  DNA is locally more or less condensed and that the accessibility of particular genes is totally different from one cell to another. Studying chromatin can also give us fundamental new knowledge about formation of diseases such as cancer.’

We mimic what is happening in the cell and describe it with physical parameters: we study chromatin’s stiffness, stability and its dynamics: how easy is it to stretch the chromatin, or to twist it? This has not been reviewed in any biology textbooks. But we now have the technology to look deeper and deeper and deeper and we can now manipulate a single molecule.’

‘I use a technique called magnetic tweezers. I take a DNA molecule from a bacteria and add proteins. I attach the DNA strand to a glass surface from one side, while the other end is bound to a magnetic bead and then, using magnetic field, I pull on the whole molecule. I can stretch it, twist it and by measuring the extension with a nanometer accuracy, we can tell more about its structure and dynamics. We also want to investigate real chromatin molecules, extracted from cells.’

‘Leiden University and TU Delft both have excellent biophysics labs. My research is the joint project of Prof. Nynke Dekker in Delft and Dr. John van Noort in Leiden. Both groups have a huge expertise in single molecule manipulation and by combining the efforts we can better understand complex biological systems.’

My work indeed combines both theory and experimentation. John van Noort’s lab developed a statistical mechanics model to interpret the experimental results. In Leiden, I use classical magnetic tweezers, in Delft I can use novel variants such as electromagnetic torque tweezers and freely orbiting magnetic tweezers. Both institutes work intensively to develop their equipment so that I can look at more single molecules at the same time. With such a high throughput and variety of methods, I expect to still learn a lot about chromatin structure. The great thing is that my Leiden database is consistent with the results I obtain with Delft set-ups, so I can confidently proceed with my research.’

‘I want to be at multiple places at the same time! I try to be an equal part of both groups and take part in discussions. Time is the real limitation here though. Hassle with the trains and attempts to find my bicycle in the huge cellar at Delft Central Station are frequent. Both LION and Bionanoscience departments are moving to the new buildings next year. This is going to be a real challenge!’

SANDER BLOK AND THE EFFICIENCY OF MOLECULAR SWITCHES

Sander Blok did a BSc in Chemistry at Groningen, but along the way discovered that he enjoyed physics more. Through an MSc in Nanoscience he ended up in molecular electronics, where his chemistry background has stood him in good stead. He is now in the third year of his PhD research.

‘I’m investigating how electronic currents flow in networks of nanoparticles, looking in particular at the efficiency of molecular switches. With an ordinary switch you turn a light on and off. But molecular switches are always ‘a bit on’ and ‘a bit off’. We want to improve their efficiency in that respect. That means knowing how a molecularly switched network works. We want to find out everything about the factors affecting electrons’ transmission chances within that kind of network.’

‘Actually, mainly because I really like doing it. And to add another piece to the puzzle. But molecular switches do have plenty of practical applications, too. For example, you can use them as sensors, to detect light.’

‘My supervisor at Leiden, Sense Jan van der Molen, has built a network of nanoparticles. At first he used bridges, but then he replaced the bridges with molecular switches operated by, for instance, firing photons at them – although that depends upon the type of molecule. Then he measured the resistance across them when they were on and off. The difference turned out to be not that great. We want to know why that is, so that we can exploit the properties of the network to increase the difference between on and off.’

AND WHAT DO YOU DO?

My specific research question is: how does cotunneling contribute to the flow of electrons through the network. Cotunneling plays a role at low temperatures. It means that two electrons are needed to move a net total of one electron from particle A to particle B through a molecule placed between them. That’s because a single electron lacks the energy needed to stay on the molecule for the time – just a fraction of a nanosecond – it takes to cross it. So it’s bounced back. Unless, that is, another electron jumps from the molecule to particle B at exactly the same time. Then there is transmission.’

‘Leiden and Delft are both at the forefront of research into molecular conductivity. I’m part of a joint project led by Sense Jan at Leiden and Miriam Blaauboer at Delft. Sense Jan is very good with molecular conductivity in networks, whilst Miriam’s group is great at predicting their properties. It calculates how the chance of transmission is affected by various factors. Chaos, for instance – that is, when there are gaps between the atoms. Or tension. The more tension there is, the less chance of transmission. But this is still purely theoretical. We now want to do practical experiments with it.’

‘Actually, for me it’s the other way round. My experiments are in Leiden and I work with theorists at Delft, in Miriam Blaauboer’s group. Delft has a lot of theoretical knowledge about cotunneling. That means that I spend less time there than in Leiden. Fortunately, though, we do have the joint Casimir meetings and the retreats. The whole group went to France for three days. That was really fun. A very good programme, and I learnt to snowboard as well. And you can also talk about theory on Skype.’ 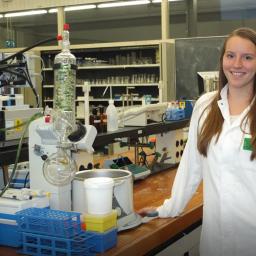