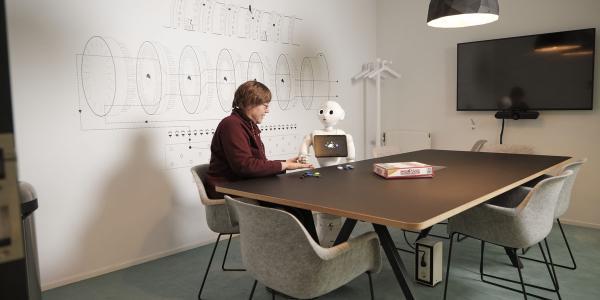 Hybrid intelligence stimulates both human intelligence and the development of the artificial variant. Catholijn Jonker is a strong advocate of this new vision. In other words: the computer as a sheepdog for humans.

The question of what artificial intelligence is and what problems it should solve has shifted with the passage of time. In the past, people were far better and faster at calculating than any machine. Since then, the problem of calculation has been totally solved by computers. But, quite aside from this, the mainstream approach in artificial intelligence (AI) has always focused on autonomous systems that can replace people and human activities. "However, I see much more potential in intelligent systems that collaborate with humans, can adapt to changing circumstances and explain their actions. The idea is that you make much greater progress by combining artificial intelligence with human intelligence. This enables both of them, human and computer, to grow. Compare it to a sheepdog that accentuates the sheep-herding capacities of a shepherd. We call that hybrid intelligence”, explains Catholijn Jonker, Professor of Interactive Intelligence at the Faculty of Electrical Engineering, Mathematics and Computer Science (EEMCS).

This radical basic idea was last year awarded funding by the so-called Gravitation programme, financed by the Ministry of Education, Culture and Science (OCW). This funding will enable leading researchers to spend ten years working on fundamental research and collaboration. The research proposal Hybrid Intelligence: Augmenting human intellect was awarded a total of €19 million. Together with colleagues at Amsterdam’s Vrije Universiteit (the main applicant), the University of Amsterdam, and the universities of Leiden, Utrecht and Groningen, Jonker and her Delft-based Interactive Intelligence department will set to work developing theory and methods for intelligent systems that collaborate with humans. The aim is for these systems to enhance our strengths and compensate for our weaknesses.

Jonker: “In the faculty of EEMCS, our main focus is on the dialogue between humans and machines, in which they each help each other by shining their own light on the shared challenge. This means having the capability to explain your thoughts to the other, and the social intelligence and ability to learn from that dialogue.”

In other words, it is essentially about building the bond between the computer and people, especially for the longer term. “Currently, for example, coaching systems work for a few weeks at most. But the interaction in a hybrid intelligence system needs to be able to adapt over a long period; and it needs to remain engaging and enthralling. This means that the development of hybrid intelligence will very much depend on knowledge from other disciplines, such as psychology.”

This is why it is particularly useful that Jonker not only works at TU Delft (since 2006) but also at Leiden University. Since 2017, she has also been a part-time professor at the Leiden Institute for Advanced Computer Science (LIACS). “This enables me to see connections with other disciplines, in a way that’s not possible at TU Delft. Within hybrid intelligence, these external connections are absolutely essential.”

Read the full article at the TU Delft website