Augmented reality is computer simulation triggered by a real world context. The big question for educational institutions is: how does this foster deep learning. For the 8th Innovation Room CEL invited four (groups of) experts in the field to present their findings and experiences.

Keynote speaker is MIT professor Eric Klopfer, author of the book Augmented Learning. His research focuses on serious gaming and simulations in learning.  The question is: ‘How do we use the real world in learning and how can we improve and enrich this with  virtual objects? Before giving answers he shares with the audience the components he thinks are important to  successful use of games in education.

Edutainment (‘Where play is the reward for learning’) is useless in learning;  a game without a relation with learning material only serves as a reward in itself and if you skip the reward (game) the learner’s motivation disappears.  This principle is called ‘chocolate covered broccoli’: A child will eat the broccoli but will not be motivated by the chocolate to do this more often. Klopfer’s example is the game called ‘Math Blaster’: it is fun to do but has nothing to do with mathematical problems, whereas the goal is to give the learner a learning experience by playing the game. Hereto you should look for a ‘pleasantly frustrating experience’; gaming is extremely suitable for this, as long as it is based on good design principles, Klopfer emphasizes.

The way and extent in which the game is structured  has a huge effect on the  enjoyment of the learner. Eric gives five design principles:

To keep a game interesting you should consider the ‘four freedoms of play‘ when designing a game: players should have the opportunity to fail, experiment, adopt several identities and control the extend of energy they put in the game. 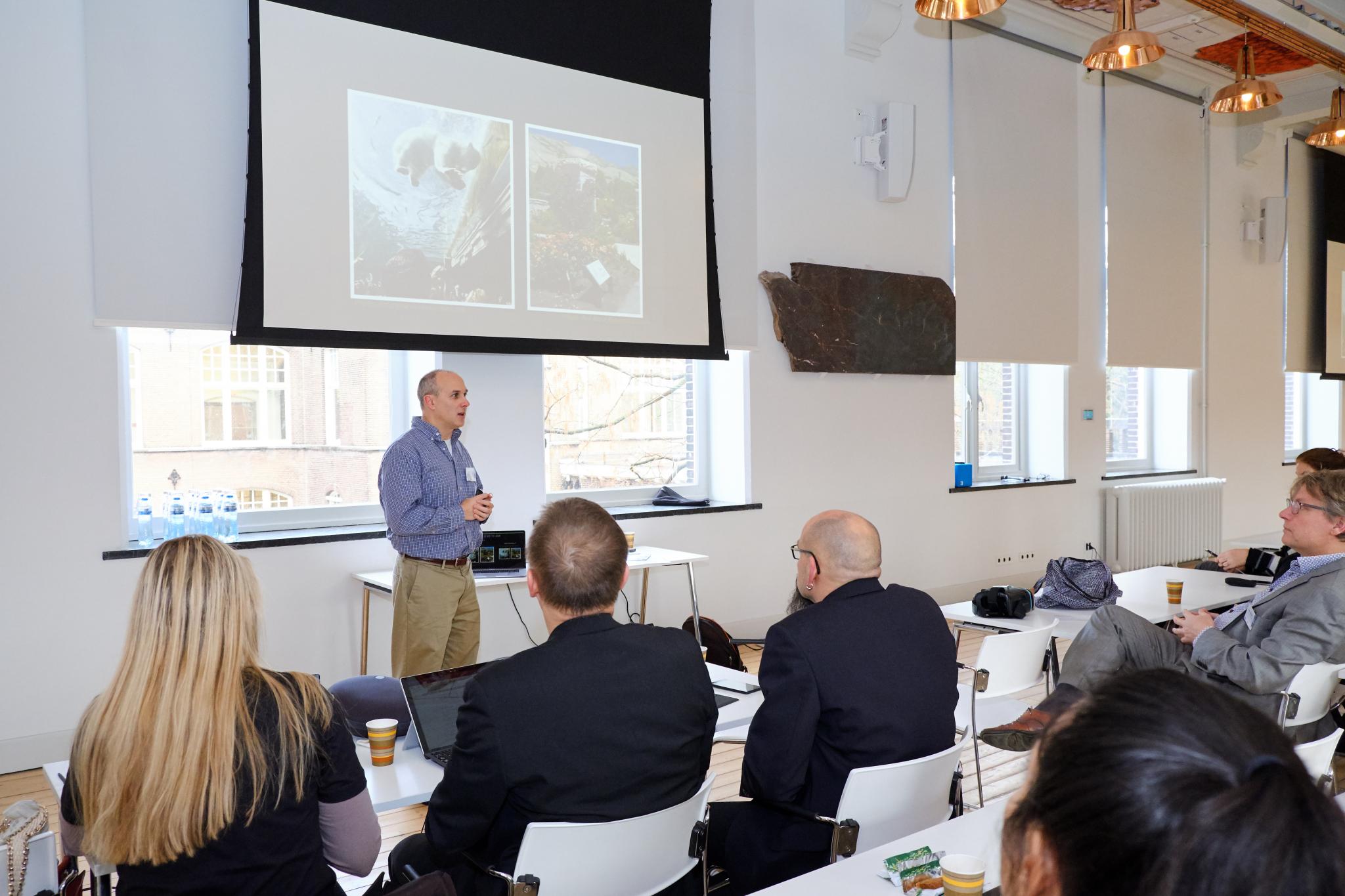 The use of augmented reality in educational games provides chances to combine social and sociological  aspects  with science. Making the connection between the real and the virtual world is the main challenge. How do you reinforce the learning experience with virtual elements and how do you prevent these elements to distract the learner from the learning materials?  To design AR games MIT developed the Taleblazer platform. Eric shows an example of an AR game in an open air museum  where players go through the game  at their own pace but interact with each other. By using a positioning tool virtual elements appear at the right moment. When GPS cannot be used as positioning tool, iBeacons is used. At the end of his presentation Klopfer pleas for learners to make their own AR games, a nice suggestion!

What motivates the learner to play the game in the first place?, a member of the audience would like to know. ‘Two elements are key’, according to Klopfer:  ‘1. a narrative (e.g. about empowerment, rebellion, depending on the age of the player) and 2:  a series of interesting problems to keep them going.’

Another question was: How can we use prior knowledge in games? This turns out to be a real challenge. Klopfer: ‘This would be an important next step.’

Beerend Hierck and Thomas  Hurkxkens: Learning in mixed reality with the Microsoft Hololens

Inspired by  Holonatomy app of Case Western University in Cleveland and the case of Marco van Basten, the famous Dutch soccer player who suffered from severe ankle problems, Hierck en Hurkxkens developed the idea of developing a virtual model of the ankle and pair this to movements of the ankle of students.
The next step is to combine the AR learning tool with story telling techniques, using the story of soccer player Marco van Basten: ‘How can we help Marco van Basten to play soccer again?’ The big question for Hiercks is: will these educational innovations turn students into better doctors? 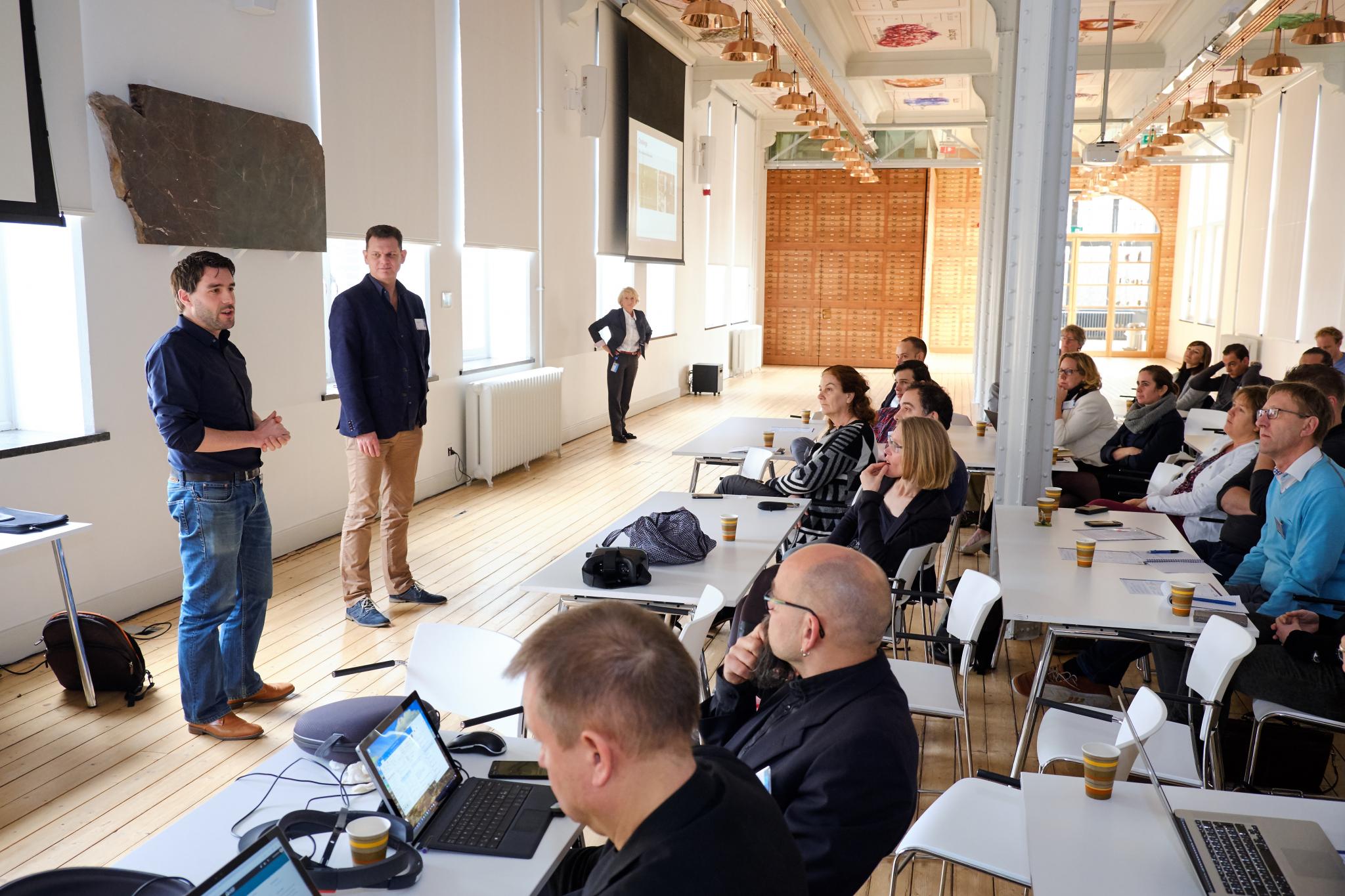 Programming a good virtual ankle was not the biggest problem, but the use of a real ankle to control the virtual model appears to be very complicated. This is not possible with the Hololens and  Kinect turns out to give a huge delay, so some challenges still have to be defeated. When the app is finished, it will be available for anybody. The Erasmus Medical Centre is currently developing a similar app to use in plastic hand surgery. At Leiden University, archaeologists are also involved in using the Hololens in education. LDE CEL is looking for opportunities to pair these initiatives to develop  generic learning scenarios and feedback tools.

After a short break Nelson Jorge, Sofia Dopper en Johanetta Gordijn of the Delft Extension School put the audience to work.  The message is that  AR and VR are in the pockets of us all; we all have a smartphone with recording devices.  Which lightweight applications can the audience invent in order to be able to apply AR/VR in education at a low cost base? Each table gets an ‘AR & VR Learning Experience Canvas’ to elaborate the ideas. 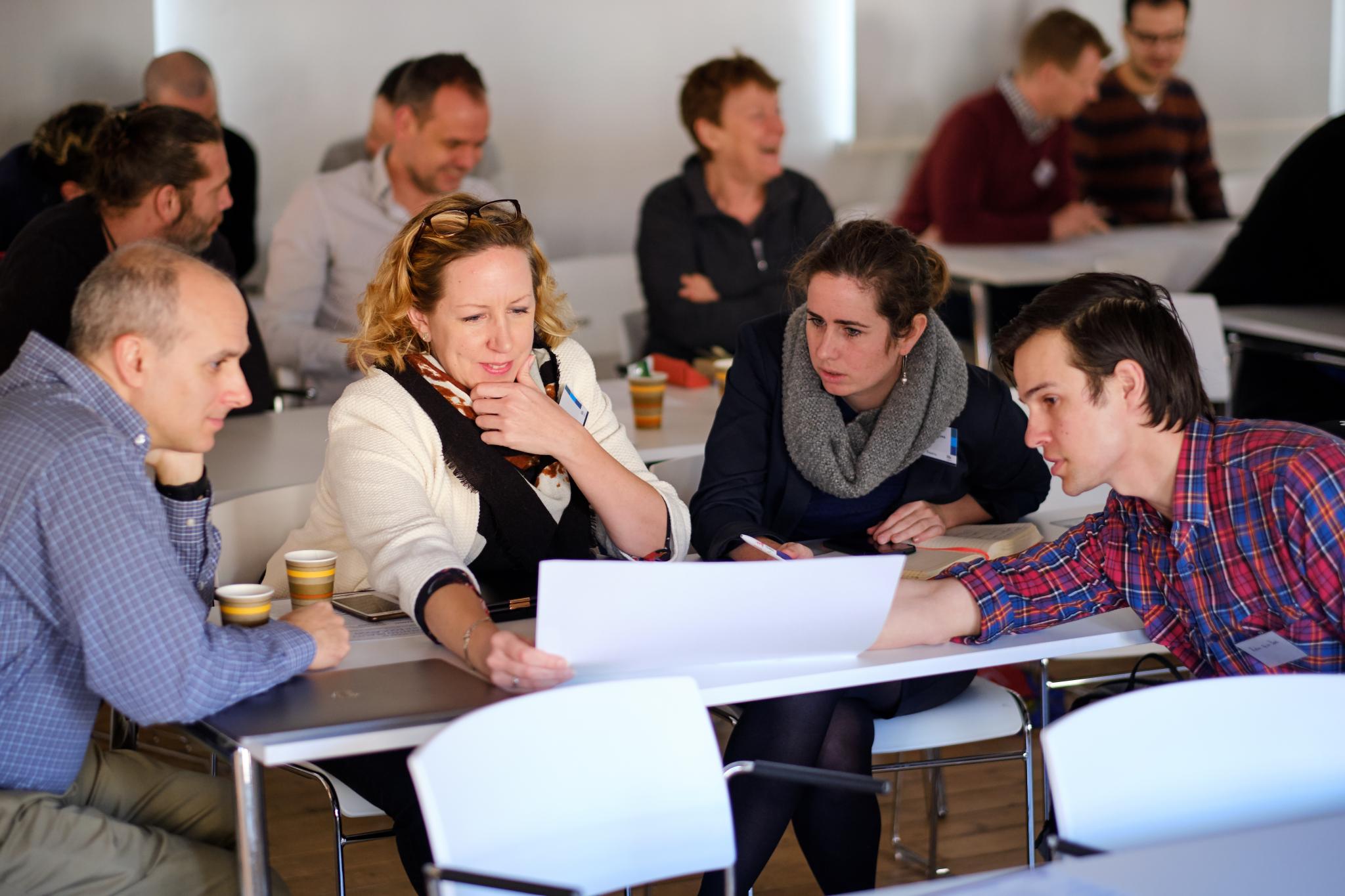 The audience came up with various ideas: rebuild the Rotterdam city centre using augmented reality on a smartphone, use the Hololens in vocational education about arthritis of the hand, use AR in a public transport setting.

‘Using one another’s labs will be the future of all labs’ Pasi Vahimaa en Joha Eskelinen (both University of East Finland) predicted, when presenting their project ‘Sm4rtlab’. The idea of Sm4rtlab is to maximise the use of expensive labs and infrastructures by making it possible to control the devices and cooperate on distance via an internet-of-things-cloud-solution. 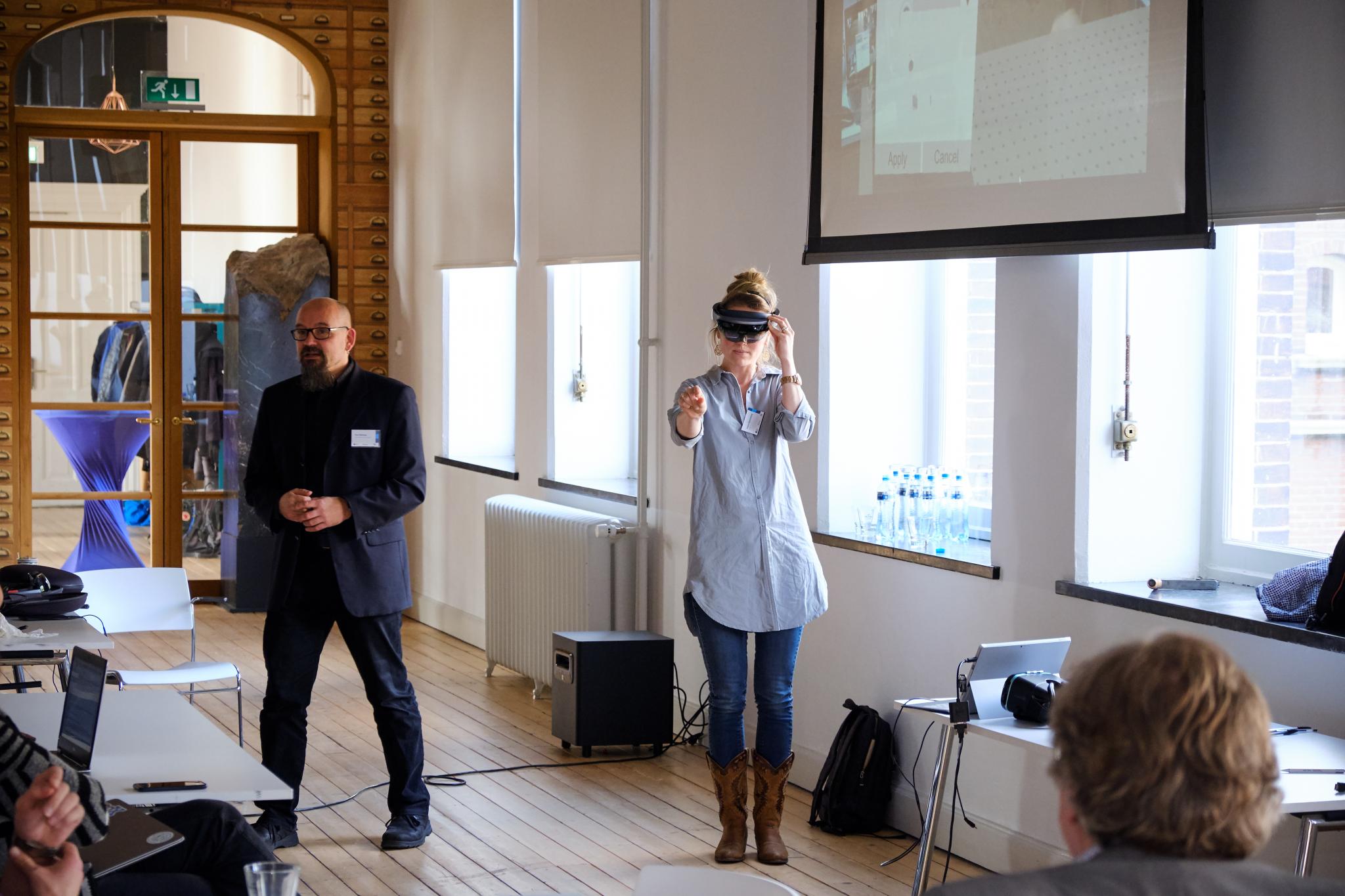 They virtualised Pashi’s optometric lab in Finland with Unity, so experiments in the lab can be done at a distance. In the virtual environment equipment can be controlled via the Internet of Things. Webcams show what happens in the lab. With the Hololens one can project and control your own environment in the virtualised lab.

If the virtualised lab is not connected to the real lab it is possible to do more experiments at the same time. Virtualised components can also be duplicated: you buy one lens and one laser and you are able to create a setup with 100 lenses.

We would like to thank Pieter van Rooij of the Ixperium centre of expertise for his contribution to this report.

Centre for Education and Learning